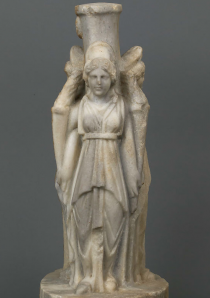 The Greek Goddess Hekate is an ancient goddess, possibly originating in Asia Minor. In Hesiod, she is described as the only child of the Titan Perses, the Destroyer and Asteria, the Starry One – quite a combination of origin! She ruled earth, heaven and the sea in ancient times and later became seen predominantly as a moon goddess connected to the night, the underworld and its spirits and the crossroads. She could bestow wealth, give victory in games and war, grant glory, help horsemen, give a good catch at sea, all of which could be withdrawn if it was undeserved.

In the myth of Demeter and Kore, Hekate is the only one who is aware of where Kore has gone and helps Demeter in her search, finally guiding Persephone back to her mother with her torch.

Hekate is depicted as a beautiful young maiden, she was after all, immortal. Virgil described her as ‘threefold Hecate, triple faced maiden Diana’ In the Chaldean Oracles she is described as both Hekate and Selene as the same goddess; ‘I come, a virgin of varied forms, wandering through the heavens, bull faced, three headed, ruthless, with golden arrows, chaste Phoebe bringing light to mortals, Eileithyia, bearing the three synthemata of a triple nature’. The synthemata are her sacred symbols, her main ones being a torch or twin torches, a key, a dagger, rope, crescent moon, jasmine or aconite and animals which included dogs, wolves, polecats, bulls and horses. Petitions to Hekate were considered answered if a dog barked or a wolf howled on completion.

Hekate was also depicted as a three headed or triple bodied being with 2, 3 or 4 heads, human or animal. Sometimes her totem animals, the dog, horse and bull took the place of the head. She is also often depicted with the three headed dog Cerberus who guarded the entrance to the Underworld and in that connection, she has been described by Apollonius as coming ‘up from the abyss, garlanded by fearsome snakes that coiled themselves round twigs of oak, the twinkle of a thousand torches lit the scene and hounds of the underworld barked shrilly all around her’.

Hekate had many epithets; Hekate Trivia of the three way crossroads, Hekate Nyktipolos in her night wandering magic, Hekate Phosphoros, the light bringer, Hekate Dadouchos the torch bearer, Hekate Kleidouchos the keybearer and many more.

Hekate’s suppers were food that was left at crossroads near triple sided shrines which were also found in homes and were known as Hekataion (shown below).

I’ve only scratched the surface with this complex goddess who has such an ancient history. She has found great popularity in modern times with witches in her aspect as Queen of Magic and Sorcery and is now sometimes viewed as a crone, steeped in ancient magic and as old as the hills.

I have found her personally to be immensely responsive to feelings of being lost or outcast and certainly she ruled over the disposed, appealing to slaves, the poor and women who had no homes and were thus unprotected. Her sacred place of the three fold way, where she herself was once abandoned, invites us to seek her when we have lost our way, when we need guidance and when we are in a darkness of our own making, unable to see a way forward. It has always seemed to me that not only does she offer the way forward, but if we are receptive to understanding the message, we can also discover what has held us back. As a keybearer she can open the gates of our minds and souls to the wonders that lie beyond, when we are ready to boldly look into the darkness and find the light within that will guide us.