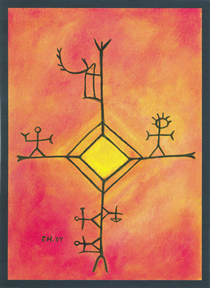 As anxiety rises with lockdown and the challenges associated with not being able to meet up with loved ones, let me introduce the goddess Beiwe to you. The Sami people turn to her to help restore mental health and we could all use a little of her light right now!

Beiwe, Paive, Beaivi or Beivia is the Sami name for the sun and is a spring and sun goddess of fertility and sanity.
The Sami people are indigenous to Norway, Sweeden, Finland and north west Russia, the part that used to be known as Lappland. Sami myths are closely connected to nature – they tell of gods of rain and rock, goddesses of sun and moon, and each myth reveals their own intimate connection to the natural world and the numinous.

The sun was sometimes seen as male, but mostly female and when, in winter, the sun doesn’t even reach the horizon, its easy to see how significant a goddess Beiwe became.

In Scandinavia, at the winter solstice, a white female reindeer was sacrificed in her honour so that she would return to the world and put an end to winter:
“they made a wooden image, one end of which they formed like a globe and furnished with thorns, or they used only a large wooden ring decorated with figures; these objects were besmeared with the blood of the sacrifice. The animals offered up to the “Sun Virgin” were always female and where possible, white. At the very least, a white thread had to be sewn through the right ear of the sacrificial reindeer.” (Homberg)

At this time, butter was smeared onto the doorposts so she could collect it on her travels and gain greater strength to rise in the sky – butter later formed part of the sacred meal in her honour.

Reindeer meat was also threaded into sunwheels and tied with ribbons in her honour – after all, according to tradition, the Saami received wild reindeer as a gift from the daughter of the sun and thus survived the most severe winters in the world. At the summer solstice, the sunwheels were made out of leaves and tied up in her honour and a sacred meal of porridge made with butter was offered to her. Occasionally, a spinning wheel with flax was also offered.

Drums are also significant in devotion to her. The symbol of the sun is represented on the drum as a circle, through the centre of which are four lines which are sunbeams. They spread her power across the four directions of the earth and are known as the four reins of the sun (Kharuzin, 1890). There is a connection between the sunbeam and the reins, particularly for those who breed reindeer and the Sami mythology, fertility and the sun walked hand in hand. The drum was used for healing and calling upon the spirits and deities of the land.

In my research on Beiwe, I came upon a goddess to talk about another time, but cannot help share her with you; Gieddegeazegalgu was the goddess of Kentanpaa, the liminal space between the home and the forest, the familiar and the unknown. A shaman could travel to such places to meet her and she would meet them in that in-between place. She was a goddess of such journeys, of taking chances, seeking wisdom and curiously asking questions until she found the answers she sought. Such rich mythologies take is deep into the heart of ancient peoples and their sacred connection to the land and all living things.

Beiwe, the Mother of all living creatures, travels with her daughter Beaivi-nieida (goddess of healing) in a shed overlaid with reindeer bones. They would both collect green plants to take back to the reindeer and thus provide for the people and would return, bringing spring with them. It makes me think of the song from the musical Hair;
“We are stardust, we are golden and we’ve got to get ourselves back to the garden”.
These golden goddesses come from the sky and bring nature back with them in spring, and yet the words from the musical have great significance for us today to get back to nature, to find our own place within it, despite the challenges, despite hardship, we have to find a way to re-connect, to remember and respect our lands.

There are many stories of the sun goddess and her children. The daughter of the sun, we have already seen gifted wild reindeer to the Saami. The son of the sun gained a bride from the ‘land of giants’ and produced sons known as “Galla-bartnit” or sons who went hunting and these are the ancestors of the Saami people. Galla-bartnit invented skis to help them hunt for elk and the Saami people were so grateful, the galla-bartnit were immortalised in the stars where they can be seen as the constellation Orion’s belt and where they continue to hunt!

Amongst the most articulate and beautifully written myths is ‘The Death of the Sun’s Daughter’, where the Sun’s daughter leaves her grave and wanders like a spirit with a herd of reindeer. When she is awake, she cannot be seen, but when she sleeps both her and the herd are visible. The one who wakes her can claim her and the reindeer. But he must also show himself to be worthy and carefully follow her instructions. So the story goes that a lazy lad, surprises her and as he doesn’t listen carefully, he fails to keep sunlight out of the tent and as a band of light comes in, the daughter of the Sun should ‘Oh I can see my mother and father’s eyes’ and she disappears into the light. And so the young man loses both the herd and the daughter of the sun. Perhaps living in such a harsh environment teaches one to pay attention, every step of the way.

Many other myths can be found in the Kalevala, the national epic of Karelia and Finland and a major work of finish literature – they make a fascinating winter night’s reading and can be found here in the wonderful sacred texts site; https://www.sacred-texts.com/neu/kveng/index.htm

And so we welcome Beiwe, the goddess of the sun in the mythical world of the Saami people, soaring across the sky in her hut covered in reindeer bones, her daughter gifting reindeer to the Saami and thus, their beauty and magic to us all.

Oh and I meant to add, of particular interest to witches may be, that in one of the myths, the Son of the Sun travels to find a bride. He travels beyond the sun and the moon and reaches the land of the giants where he spies the giant’s daughter and her father agrees and they are married in ritual manner, on a hide of a whale, blood is blended and knots tied. As a dowry, the bride takes with her, some of the golden cliffs and is given a key to three chests. She also takes the cloth she was washing with when she was found and on the cloth are three knots for three for three goddesses; Mattarahkka, Sarahkka and Uksahkka – they are three wind goddesses and the knots offer three grades of wind strength from breeze to strong gale that are released when the knots are untied! In the myth, her brothers decide she shouldnt be married and give chase. She releases the winds, one at a time and the brothers are lost. But she arrives at the home of the Son of the Sun and go through another ritual, on a bearskin and the hide of a two year old female reindeer. And then, “her doors become wider”, and “the room becomes larger” and she gives birth to children that are the Saami people.