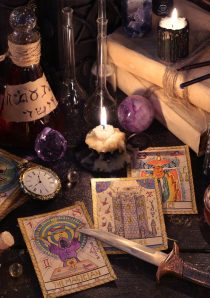 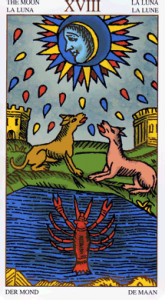 “Divination has been practiced a way of knowing and communicating for millennia. Diviners are experts who embrace the notion of moving from a boundless to a bounded realm of existence in their practice. They excel in insight, imagination, fluency in language and knowledge of cultural traditions and human psychology” (Tedlock, 2006)

Humans have, since the beginning of their time, sought to understand their place in the universe, the meaning to life’s great mysteries such as who am I, where am I from and where am I going? It is a universal human trait and some form of divination has been practised across the world since ancient times to try and offer answers to such questions.

The earliest civilisations of Babylonia, Egypt, Greek, India and China looked not only to the stars to observe their patterns, but also to the flight of birds, the drifting of clouds, the entrails of animals and the patterns in the earth and sand to help answer their questions. In ancient Egypt, many temples had temple diviners who would interpret dreams and symbols and in ancient Greece, the Oracles of Delphi and Dodona were exceptionally well known across the Mediterranean world.

Vision quests of the Aboriginal people and the Native Americans, like dreams, were interpreted for prophecy or life’s questions and the ancient Chinese read patterns on tortoise shells which later became the book of philosophy known as the I Ching. The Vikings had their runes, which were made of wood and cast to divine their meaning and the African peoples used bones and sticks to do the same.
The word divine refers to god and to divine is to understand the will of god. Divination therefore was considered a highly respected sacred skill. Gods and spirits were an integral part of divination, making offerings to personal or tribal deities before the practice commenced was viewed as a respectful way to proceed.

We have come a long way from times when it was so respected and indeed the practice of this art has long been demonised and at times, dangerous to practice.

But in these modern times, it has found something of renaissance. With the birth of a new sacred, neo pagan traditions have promoted divination as a way of bringing the unconscious themes in our lives, into conscious understanding, so that we can work with both as a way forward in making the decisions that create the lives we lead.

Tarot is one such divinatory skill that is particularly enjoying current popularity. Born in Renaissance Italy, it evolved quickly from a card game of Tarocchi to being used by diviners and for witchcraft. It grew in popularity in France and later, after the printing of the Rider Waite Smith tarot deck, quickly grew to universal appeal and there are now thousands of decks using different art and symbolic images to interpret the main themes.

Tarot as a contemporary form of divination, uses a blend of interpretative and intuitive techniques to gain insight, or understanding of a situation or issue. The theory of synchronicity, explained in depth by Carl Jung, offers an explanation of meaningful chance and the theory of the collective unconscious, which asserts a commonality of myth and symbol amongst different cultures and offers a potential explanation of its methodology.

I still use both these methods for myself and in my teaching, although they were initially seen to be separate. To read and teach in a way that weaves knowledge with wisdom, logic with intuition and experience with imagination works for me and the many students I have had the privilege to be at the beginning of their tarot journey.

I will be adding annual predictions of the year, interpretations and lectures on the cards and there will be plenty of courses and webinars that you can join in with or learn at your own pace.

with the blessings of Fortuna