Wicca, the Goddess and Paganism 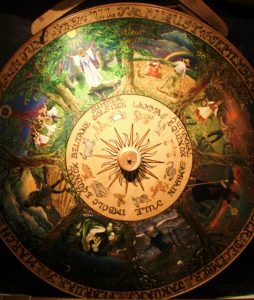 From animist and pagan beginnings where people sought to understand the meaning of life through nature itself, through observation of patterns in the sky, the ebbing and flowing of the tides and the symbolism within nature. The intuitive was revered together with the search for knowledge, both being inseparable.

Somewhere amongst the need for authority and a monotheistic religion rapidly spreading across the world, those connections and reverences were severed. Whereas once, god was in all things, visible to each of us, both male and female; god became transcendent and separate, intermediaries became authorities and women’s voices were no longer heard.

As natural plants find their way through cracks in the concrete, esoteric traditions found a way to survive, broken perhaps and not in one cohesive place, but they evolved and grew through the Western Esoteric Tradition as it is now known; a collection of esoteric practices and philosophies that began with the Renaissance of ancient Greek philosophy in Italy and travelled across Europe with Alchemy, Astrology, Christian Kabbala, Magickal Grimoires, Neoplatonism, Freemasonry, Hermeticism and Rosicrucianism.

By the late 19th century, occult traditions began to flourish and together with a Romantic Revival, a rising environmentalism and the rise of the Women’s movement, the time was ripe for the old wisdom to find a new expression.
And so the Pagan Revival and the western form of modern witchcraft grew out of the 1950s UK initially as Wicca, a magical, polytheistic, ritualistic, nature honouring practice and was an expression of the magical practice of Gerald Gardner in tandem with the Druid Revival by George Watson. It grew rapidly, seeding new groups and with the repeal of the Witchcraft Act, Gardner’s vision of Wicca and the time being right for a re-visioning of religion and ways of expressing the sacred, led to a Pagan Revival. Covens (pagan groups) rapidly emerged in Europe and America, where Wicca began to grow as a different, more intuitive and inventive path, incorporating local or indigenous native traditions and seeding the rise of a goddess movement, focusing on the worship of the divine feminine.

In the space of sixty years, Wicca had grown into a worldwide praxis, honouring witchcraft, nature, spiritual authority of women and practising magick. I think Wicca acted as a catalyst for people in other countries to find ways to reclaim their spiritual origins, traditions and practices. This is continuing to grow across the world, bringing alternative ways of revitalising ancient traditions with new awareness, offering an independent engagement with the sacred that, together with fresh insight and ongoing study, might well represent holistic, rich and profound ways of being ensouled in the world and finding that connection that we have missed for so long.

Witchcraft has been practised in almost every country in the world for as long as we know. A desire to understand how to use the natural world for good or for power and to bend it to one’s own will via a knowledge of charms and spells, healing magic and curses, divination and ritual is documented in most cultures and is known under the umbrella term of witchcraft.

Predominantly used for benevolent reasons, people would seek such practitioners out to heal sickness, to cure impotence, to find love, to punish theft, to restore justice and to call up the dead for prophecy. It has always been a rocky road to travel – on the one hand there was respect and reverence for those who were helped by such magic and on the other there was anger and at the worst, death if the magic went wrong or the suspicion that the practitioner had caused harm prevailed.

The suspicion of many illnesses and misfortunes being the fault of the such practitioners led to an idea of black or white witchcraft – black being for evil purposes and white for benevolent ones. But life is rarely that simple as ‘good’ and ‘bad’ is it? And how can you have knowledge of herbs to heal without knowing which ones could kill? It didn’t make a person guilty of murder.

Charmers and cunning folk were so numerous before the twentieth century that tens of thousands of people in contemporary Britain must be descended from them. (Hutton, 1999, p. 287).

Wicca and Witchcraft are different streams and continue to evolve. Where once Wicca was the only acceptable form of witchcraft, many are reclaiming the word ‘Witch’ as a way of reclaiming ‘being different’, being alternative and owning their right to live their lives as they choose.

It will be interesting to see where this takes us in the coming years.