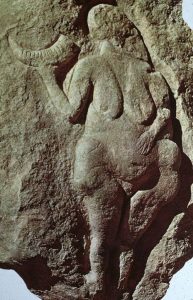 The ancient Mother Goddess arose with our evolving consciousness as the womb from which all life sprang. She was seen as the hearth fire around which all gathered for warmth and sustenance; as the cave that protected and gave shelter and the life force within the bellies of women and the earth from which all living plants arose. Ancient peoples embraced the Goddess as the source of life, sustaining, nurturing and receiving.

Whether She was seen as a young maiden, an old and frightful Crone or a Mother of abundance, she carried within Her the well of ancient wisdom, knowledge of the stars, the birth of the planets and the memories of ancient ancestors.

Her worship evolved as we did, seeking understanding and wisdom of ourselves and the world around us. The stars revealed celestial goddesses, the earth revealed fertile and abundant goddesses, the seas described transformative goddesses and out of fire came goddesses of passion and change.

The ancient myths of the Goddess reveal knowledge of transformation and rebirth, of war and rage civilisation and peace, love and wisdom. The Egyptian Goddess Isis was a mother, a lover and a Queen of Magic and power; the Greek Athene demonstrated wisdom and civilisation; Ala, the African goddess of the earth, giving life and receiving the souls of dead as well as dispensing justice; Sedna, the sea goddess of the Inuits, Beiwe, goddess of the Sami people and so many, many more!

Sky Goddesses evolved from the observation of the stars and the planets, the desire to know what lay in the dark mysterious night and in the cycles of the moon which drew the huge oceans and seas in and out as if in tune with the breath of the Goddess. They were seen when questions of our origin and future begged answers. They were seen in the life giving rain that swelled the rivers, relieved the parched soil and made plants, trees and fruit grow. Devotion of such goddesses revealed knowledge of the passage of the stars and their meanings, how the planets appeared and disappeared in our skies and thus astronomy and astrology was born.

The body of the Earth Goddess was the mountains and hillsides, the fields and wild places where she was the life force of creation and in the deep dark places, as the sojourn of the soul on its way to rebirth, the home of the ancestral spirits and the mysterious underworld. She was worshipped in this aspect as the serpent of renewal and transformation.

The Sea Goddess was found in the oceans, the rivers and the streams as the waters of creation, the fathomless depths that could contain all life.

Celestial Goddesses, Warrior Goddesses, goddesses of love, compassion, sexuality, freedom and peace abounded across the world from Cerridwen, the Welsh Goddess of transformation to Kwan Yin, Chinese Goddess of compassion; from the Mexican Goddess of the earth, Coatlicue to the Japanese Shinto Goddess of the sum, Amaterasu, from Freya, the norse Goddess of Love to the Russian Baba Yaga, she was Shekinah to the ancient Hebrew mystical tradition – the Goddess lived amongst us.

Through ancient texts such as those found in Nag Hammadi, her voice echoes across the years as one of power and compassion; She creates, She destroys, She regenerates. She is found in all things, all beings and all places and our connection to her was our connection to our mother, to our origin, to nature and the world around us and with Her, we were never alone.

As we sought knowledge of the world around us, the ability to control and manipulate became prevalent and as the separation from our connection to nature began, so the Goddess became lost to us. She was denigrated and defiled, abandoned and abused, cast out and diminished and women, as mirrors of her, suffered the same fate. Where logic and reason was encouraged, the intuitive understanding that had brought us so far, was abandoned.

It is no surprise that in modern times, the divine feminine has re surfaced to answer our call to our lost soul, our abandoned home, our connection with nature and the natural cycles of life and to sense once again that which connects us rather than that which divides.

As the Goddess re-emerges into our lives, we can recreate the ancient traditions, sing the old songs and dance the sacred dances to Her once again. Light a candle, burn some incense, open your heart, still your mind and embrace the Goddess!