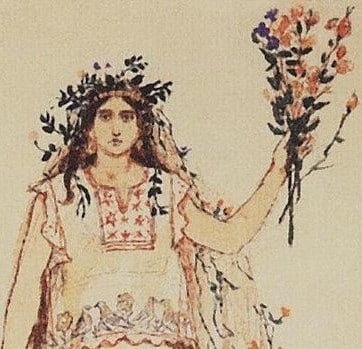 As I write this post approaching the Spring Equinox of 2022 my heart is heavy at the horror of the invasion of Ukraine, I honour their ancient deities and call upon them for their help to their people. And their deities are those of the Russian people, who are also suffering at the hands of forces beyond their control.  It is a call to help humanity.

This post is first of many that I will explore over the coming year that will focus on honouring the ancient Slavic ways.

So let’s start with the Goddess Vesna, who is the Slavic Goddess of Spring. She is depicted as young, beautiful, sometimes naked and barefoot, using flowers and ferns as garlands on her head and around her lower waist. . She was considered generous and bright as she brought the sun back with her. Her hair is long, almost to her knees, her breasts large indicating fertility and her symbols depict her with an apple, a swallow (the bird that returned from winter migration and was seen as a herald of spring), flowers or grapes. In Ukrainian, Polish, Russian and Belaursian Vesna is the actual word for spring. It was considered that the very scent of spring flowers meant Vesna was passing through.

Sometimes she is known as Zhiva, Devana or Diva and her opposite is Morana (or Marzhena) who is the goddess of winter. Where Vesna has the lusciousness of spring growth, Morana symbolises beauty in decay. Whilst they are connected, they cannot exist in the same place at the same time and it is only when winter departs that effigies of Morana are drowned or burned to celebrate the end of the dark, cold months. Then Striborg, the god of wind, brings Vesna to return life and light to the world and a new effigy of Vesna, decorated with flowers and leaves was carried in procession into the fields. In that sense, Visna also represents victory, particularly over winter and death. But together they represent the continuous cycle of death and rebirth, one connected eternally to the other and sometimes representing different aspects of one goddess in a similar way to the Greek Kore/Persephone.

In the festival of Butara in Slovenia, people take branches of spring greenery to churches on Palm Sunday for blessing. This tradition has been celebrated since 9th century, which suggests it was part of an earlier, pre-Christian ritual connected to sacred trees and flowers as symbols of spring fertility and growth, banishing evil and sickness. The twigs once blessed, were used to sprinkle over cattle and fields or graves as blessings. In some places, this is still continued and can include the house, the stable and the barn.

Vesna’s own sacred tree is the willow. When I see the sacred plants and trees of a goddess, I imagine this is how she might have been first seen – the first flowering tree in spring is the willow and it is possible it was seen as a sign of Vesna returning in much the same way as Brigid is seen in the first snowdrops in western Europe.

Eggs were also painted for the spring festival known as Pysanka. They are painted with a tool named a kistka, a small funnel attached to a stick, although before then, bones or chicken feathers would have been used. A Pysankarka is a woman who specialises in making the pysanki and collects water for the dyes without looking back and remaining silent so that the water carries no influence. Dyes are prepared with roots, herbs and bark and then beeswax is scopped into the funnel, warmed on a flame until it melts. This is where the symbols or patterns are inscribed. The symbols are then dipped in the lightest dye, often yellow and a prayer is spoken. Other colours are added in the same way and then covered in oil to keep it shiny.

Pysanki had magical properties, they were given and never sold, they could be buried for a good harvest or kept in the home for good luck or protection. Sometimes, they were given as love symbols. They were associated with the return of life and light and thus, with Vesna.

And so today, I call upon Vesna

The young and beautiful goddess of spring

May she sweep away the darkness enveloping their lands

And bring light and warmth to peoples hearts,

That those who are frozen in power, may be unfrozen

As the ice and snow melts before Vesnas footsteps

And find it in their hearts, to bring a different kind of spring